Istanbul is a city that can be equally exciting, whether you discover it on your own or take one of the many available tours. However, none of them quite comes close to the Magnificent Istanbul Tour. Yes, you guessed it: This 3-day tour is named after the worldwide TV phenomenon “Hareem al Sultan” and it offers both fans and non-fans the chance to experience the Istanbul of Suleiman the Magnificent.
On the first day, the tour started with a luxurious yacht cruise on the Bosphorus between Europe and Asia, before having lunch at a upper scale fish restaurant on the Yeniköy shore. During the cruise, we admired all the beautiful historic mansions by the Bosphorus. We were informed that lately there was an investment boom regarding luxury apartments and homes for sale in Istanbul. Following lunch, we headed to the Hareem Al Sultan Exhibition in Maslak. We were told that this is another area for prime property investment in Istanbul. Looking at the high rises in this business and financial centre; we could notice the huge difference between the mansions by the Bosphorus and the Manhattan-feel of this place. One thing remained the same, though: Both places were on the radar of everyone looking for Turkish real estate and property for sale. This day of relaxation went on with the Sultan's Turkish Bath treatment at the Haseki Hürrem (Hürrem Sultan) Bath in Sultanahmet. The bath was reserved for our own leisure and the treatment session was accompanied with music and a belly dancer show. We had Dinner at a very unique location, a man made island on the Bosphorus Strait, Suada. 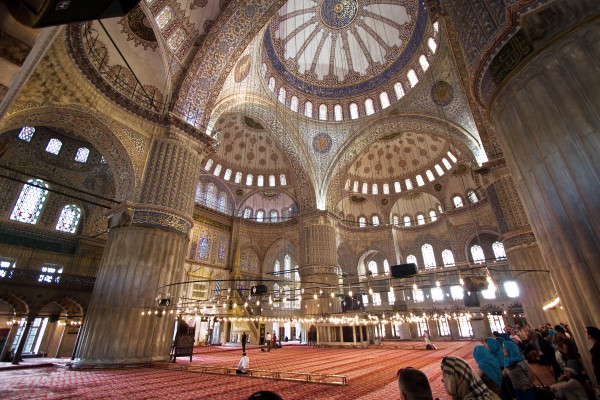 On our second day, we visited the Sultanahmet (Blue) Mosque, which gives its name to the surrounding district of Istanbul. Our next stop was Topkapı Palace, the palace of the Ottoman Empire during Suleiman's reign and where most of the outdoor scenes of Hareem Al Sultan were shot. We took lunch on the imperial grounds at Konyalı Restaurant, overlooking the breath taking view of Istanbul while tasting some of the favourite dishes of Sultan Suleiman and Hürrem Sultan. Lunch was followed by a visit to the Grand Bazaar/Kapalıçarşı. This is the biggest active historical bazaar in the world. It is not only a tourist location but preferred by the locals, too. After some serious shopping and bargaining, we went to dinner at a luxurious Ottoman Cuisine restaurant.
The final day started at the Süleymaniye Mosque.  This mosque is dedicated to Suleiman the Magnificent/Lawgiver/Kanuni and his tomb is situated on the grounds next to Hürrem Sultan's tomb. For our next visit, we went to the Hagia Sophia/Ayasofya Museum. This was the enthronement venue for most of the Ottoman Sultans after 1453. We had lunch at a 19th century Ottoman Mansion in Sultanahmet, tasting an exquisite menu of Ottoman dishes. After lunch, we headed towards the Hippodrome Square for a short digestive walk. For our tours’ last stop, we watched a Whirling Dervish Ceremony and said our farewells.