The Waterway that Divides East from West

The Mighty Bosphorus Redolent with Mystery

The iconic Bosphorus divides Istanbul into the European and Asian or Anatolian areas. This is a major expanse of water that holds the history of Istanbul; sailing on it today, whether it is by ferry boat from one side to the other, a touristic sail or just pleasure boating, the sense of history invades the trip. From the skylines to the waterfront, Istanbul’s Bosphorus can tell tales of armies, battles, slave ships and treasure ships from when it was Byzantium, through the years to Constantinople and the Ottomans and finally Istanbul.
There was a time though when the division was not there, before the lands became Asia and Europe; a time when maybe the dinosaurs ranged and certainly when the ice flowed over the earth.
Gradually the earth began to warm, ice melt created a fresh water lake where humans began to settle on its shores. At that time with there would have been around 40 miles of land between the fresh water basin that became the Black Sea and the Marmara Sea. The Bosphorus as we know it now, was probably a small river, it got its name from the Greek Myth about the legend of Io, meaning ‘Ox ford’ or ‘Ox passage’. 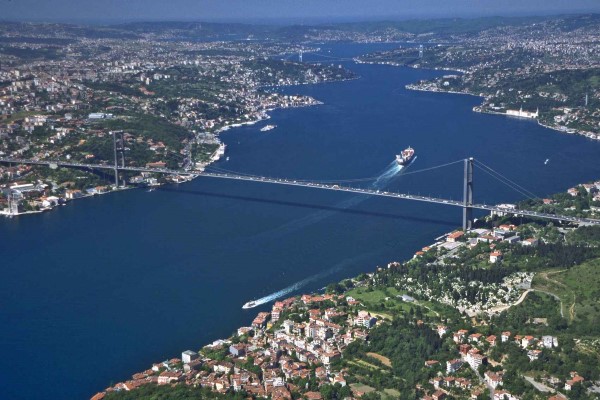 The Origins of the Bosphorus; Myths and Facts

There is no one definitive answer to that question but much speculation. Two popular theories are that it either suffered a deluge or gradually rose. The deluge theory also gives rise to the ‘Flood’ that inspired the stories that we can find reported in many ancient writings; Judean, Noah’s Flood in the Old Testament 900BC, Islamic, Nuh’s Flood in the Koran, 600CE, Babylonian, Artahasis’ Flood in Epic of Gilgamesh and many more. The explanation is that the deluge caused the people who had settled around the fresh water lake to be scattered, carrying the story of the deluge with them. In this way the event of the flood becoming a part of their histories and myths.
The theory is the melting ice caused the waters of the Marmara Sea to spill over into the lower basin of what is now the Black Sea, turning it from fresh water to salt water. The description given is for over a year the waters surged, flowing 200 times faster than Niagara Falls, raising water level between 60-80 metres and flooding 60,000 square miles of land and forever separating what would become known as Istanbul.
The opposing theory, speculated by Valentina Yanko-Homback in 2009 suggests that there was a gradually rising as ice melt filled the Black Sea and flowed into the Bosphorus. It is theorized that it was a constant slow rise; with the Black Sea being below sea level meant the flow from the Marmara was the more powerful and the waters eventually grew to mingle with the Marmara Sea becoming saline. The Flooding occurred but not in one disastrous event. The theologians and archeologists continue to debate the issue but as yet no one theory has been proven.