Turkey’s fourth largest city, Bursa is located 160km south of Istanbul, neighboring the Sea of Marmara in the north, Balikesir in the west, Kutahya in the south and Bilecik in the east. Its world-heritage historical sites, natural wonders and strategic importance make it one of the most special cities of Turkey. It has a remarkable share in the total economy due to heavy industry and year-round tourism. Being the capital of the Ottoman Empire for a long time, the city has developed historically significant architectural works, while being established on major trade routes and produced sophisticated textile goods. Today, it is the most industrialized city of Turkey, with three major industries; automotive, furniture and textile. The larger Bursa province also has everything from beaches to ski resorts pulling in luxury investment, a thriving agriculture sector, convenient means of transport, and above all, the kind people of Bursa. The three million inhabitants of the city are proud with their harmonious way of living, culture and production. The weather is generally warm except the mountain areas, especially Mt. Uludag, the highest mountain of the region at 2,543 m. Mt. Uludag is a natural park and famous winter sports resort that is open for activities all-year-round. There is a direct ropeway from Yildirim neighborhood in Bursa leading up to the mountain, ending at 1630 m in Sarialan. Bursa has all the reasons to draw in thousands of tourists as well as many investors, who want to start a business or a buy Bursa property.

The city has strong record of settlements by various civilizations. From Phrygians and Bithynians to the Roman Empire, it has had significant strategic importance along trade routes, but its accelerated development did not take place until the Ottoman period that started in 1326, after its conquest by Orhan Bey, son of Osman Bey, founder of the Ottoman Empire. It became the capital of the empire shortly after that and served as the leading city of politics and commerce for hundreds of years. Many classical examples of Ottoman architecture were constructed such as Green Mosque, Muradiye Complex, Yildirim Complex, Orhan and Hudavendigar Mosques .The Grand Mosque, which is one of the most significant symbols of the city, beautifully stands as a unique example of the Seljukian period. All of these sites can be visited in Osmangazi and Yildirim. There are also many historical inns and bazaars, which demonstrate the strong historical commercial background. Many Ottoman state officials used to have offices in those inns to carry out commercial transactions. Kapali Carsi (Covered Bazaar), located behind the Grand Mosque, is one of the oldest and most famous bazaars of Bursa, with a history going back to the era of Orhan Gazi in the 14th century. Uzun Carsi, the shopping area next to the exit of Kapali Carsi, Bedesten, the jewelry bazaar in Kapali Carsi and the bazaars of furniture, footwear and handcrafts are worth exploring. This grand bazaar is located at Heykel in the center of the city. Koza Han was commissioned by Bayezid II. in the 15th century. The backyard of the inn opens to Uzun Carsi through a door of beautiful blue tile works. Today it is the silk center of the city, where you can find many famous brands. İpek Han is also one if the biggest inns for textile and it is located next to İvaz Pasa Camii. It was commissioned by Celebi Sultan Mehmet to İvaz Pasa who was one of the most famous architects of the 15th century. 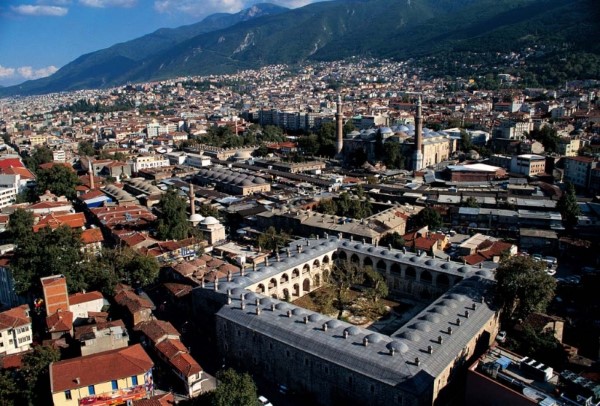 The developed central districts of Bursa are worth visiting with their perfect blend of modern buildings and historical sites, green parks and friendly people. The three central provinces, Nilufer, Osmangazi and Yildirim have significant contribution to Turkey’s economy.  Nilufer is one of the most well planned and developed settlements in Turkey. The neighborhood has urbanized fairly recently and has many gardened Turkish properties, as well as new luxury flat and apartments. Nilufer Organized Industry Zone and Besevler Small Industry Site are found in the area.

Osmangazi is the most populated and visited area of Bursa, with a population of over 800.000. Cekirge, the most upscale and modern district of the Osmangazi, is located on the foothills of Uludag and is famous for its thermal baths that draw in many foreign and local tourists, who come for health tourism. The area is also home to luxury real estate and modern buildings, making it popular among those looking for Bursa flats for sale.

Yildirim is a less industrialized province, which is also located on the foothills of Uludag and is home to several Ottoman-era artifacts. Cumalikizik, a very popular village that is part of Yidirim, is famous for its traditional wooden and stone houses. It is also one of the many Unesco World Heritage sites in Turkey.

The suburban districts are as famous as the central ones. Mudanya is a historical port town, which still functions as the main port of Bursa. The town also serves as the main access point to Istanbul, via high-speed ferries. With its settlements like Sigi, Kumyaka and Tirilye and historical Ottoman-era houses and streets, it is a preferred touristic destination. Together with the town of Gemlik, it is also one of the most important centers for olive production in Turkey. Tirilye, located at one of the most protected spots of the Mudanya coast is famous with its fish restaurants.

Golyazi is a tiny village located by the Uluabat Lake. Settlement is behind ancient city walls in this protected site that houses Roman, Byzantine and Ottoman-era ruins. There are many islands on Uluabat Lake, the largest of them being Nailbey Island, with a monastery dating back to 825 A.D.

Iznik is one of the most preferred places to visit being the first Turkish capital in Anatolia, a holy site for Christians, as well as home to the first madrasah of the Ottoman Empire. İt is also well known for its beautiful lake, exquisite traditional tile works that adorn many mosques around Turkey and olive production. 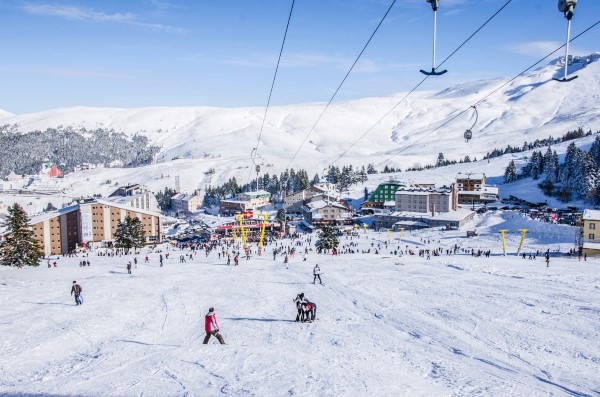 WHAT TO DO IN BURSA