Fethiye is part of Mugla and its second most populated province after Bodrum. It is located in the eastern part of the Gulf of Fethiye, neighboring Antalya in the east, the Mediterranean Sea in the west and Denizli and Burdur in the north. Its population, which is nearly 150.000, mainly deals with tourism and agriculture. Fethiye has numerous touristic attractions and its warm Mediterranean climate enables a long summer season. Moreover, its deep valleys, underwater attractions, high hills and suitable climate offer several outdoor sports opportunities like paragliding and scuba diving. Many foreign visitors, some of whom also make real estate investment in Fethiye, visit its beautiful beaches throughout the year. Oludeniz Beach, which was chosen the best beach of the world in 2006 with its unique lagoon, is one of the most populous areas during the spring and summer. Belcekiz Beach and the Kidrak Beach offer more nature and less population. Calis Beach, Katranci Beach, Gunluklu Beach and Ciftlik Beach are more preferred by the local public. The advanture and nature lovers prefer to stay in the camping areas and bungalows of the Butterfly Valley, Kabak and the Gemile Bay. The Saklikent Gorge walk trail is another big touristic attraction of the region.

Fethiye is located near the ancient Lycian city of Telmessos, which was the most important city of Lycia, dating back to the 5th century B.C. It was destroyed during the Persian Anatolian invasion and later was taken over by Alexander the Great. The town was under the control of the Roman and the Byzantine Empires until the Turks captured it in the 12th century. The Ottomans took control of the area in the 15th century. The Telmessos antique theatre, which was discovered during the excavations in the 90’s, stands in the city center. Pinara, an ancient Lycian city; Tlos, the oldest Lycian city in the region; Letoon, with its famous Hellenistic temples; the ancient Lycian cities of Patara and Xanthos all are nearby popular historical sites to visit. Cadianda antique city is home to artifacts of the Roman period. Gemiler Island (St. Nicholas Island), which has a significant importance in the development of Christianity, has historical artifacts belonging to the Byzantine Period. Kayakoy is an old Greek district, which the Greeks had to leave, according to the treaty signed after the Turkish Independence War. The remnants of this historical village and various art camp organizations attract many locals as well as tourists every year.

Fethiye is a lively town blending its local village lifestyle with its touristic potential. Its old narrow streets, local markets, beautiful marina and rock tombs welcome the visitors. Moreover, Fethiye real estate market is rapidly developing due to the ongoing construction projects led by the government and private sector. Oludeniz is the most popular place to stay for the visitors, with its luxury houses, resorts and hotels. Hisarönü is very close to Oludeniz and its lively restaurants, nightlife and shopping options make it the most favorite place for foreign expats. The nearby Ovacik district offers a calm atmosphere for nature lovers. Calis is preferred by those, who prefer to spend their holidays on a more limited budget. Yesil Uzumlu village, which is located near the Cadianda antique city, became popular in recent years with its International Kuzugobegi Mushroom Festival and its calm, beautiful natural environment. 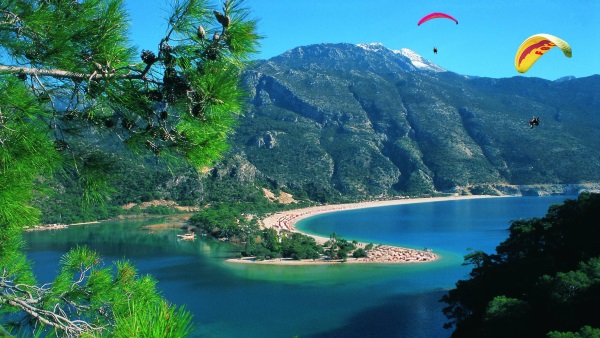 WHAT TO DO IN FETHIYE