Izmir is the third biggest city and the second biggest port of Turkey, located in the Aegean Region around Izmir Bay. It is the most westernized city in the country, with a population of 4 million. Its humid Mediterranean climate displays itself with rainy winters and hot summers. Palm trees, which are spread over its wide streets, are the symbols of the city. Izmir is an important and lively commercial center as well as a popular touristic destination with its natural and historical beauties nearby. Cesme Peninsula, the world famous touristic zone with beautiful beaches, is one hour away from the city center. Ephesus Antique City and the House of Virgin Mary are the most visited historical sites among other ancient cities. Izmir International Art Festival and Izmir International Fair have significant shares in the city’s international fame as well as its economy. Adnan Menderes Airport is its main airport, and it is just half an hour away.

The most accepted view about the ancient history of the city is that Izmir was called as “Smyrna”, when the Amazons living in the area, were defeated by Erektids, whose leader married to an Amazon woman called “Smyrna.” The city was called by her name after the conquest. By the recent discoveries made in the Yesilova Mound in Bornova, it is proved that the earliest settlement goes back to 7000 B.C. Smyrna became a close spot for the Greek immigrants, who made it an important trade zone until the Persian Invasion. Erythrai in Cesme and Ephesus in Selcuk were the ancient cities founded in this period. Ephesus, which was a strategic commercial city in the past, is an internationally popular touristic destination today. Phokaia (Foca), which is 60km away from Izmir, was another Ionian city, and is home to Kybele Temple, antique theatre and ancient city walls. Smyrna was founded the second time by Alexander the Great, in Kadifekale, in the 4th century B.C., after the defeat of the Persians. It continued to be an important trade and cultural center in the Hellenistic period. Homer, the author of Iliad and Odyssey was also from Smyrna. Pergamon (Bergama), which was founded in the 3rd century B.C, was included in the UNESCO World Heritage list by its multi-layered cultural landscape, belonging to the Hellenistic architecture and style. The first Turkish invaders came here in the 11th century capturing some areas, only to lose them back to the Byzantines, the rulers of that period. The region was taken over by the Ottomans in the 15th century. Yali (Konak) Mosque, dated back to the 18th century, is one of the symbols of Konak with its beautiful tile works and octagon shape. The Clock Tower is another symbol, which was built at the beginning of the 20th century. Asansor, (The Elevator) is a historical building, which was built to create an alternative passage from Mithatpasa to Halil Rifat Pasa, and it is another destination to visit with its roof restaurant and gorgeous bay views. Kemeralti Shopping Street in Konak, which was founded in the 17th century, is home to numerous shops and historical buildings. Hisar Mosque in Kemeralti, which was built in the 16th century, is the biggest mosque of Izmir. Sadirvan, Kestanepazari, Basdurak and Kemeralti mosques are the other four mosques nearby, which were built in the 17th century. Izmir Archeology Museum and Izmir Ethnography Museum display examples of prehistoric artifacts as well as recent history.

The central districts of Izmir are located on the both sides of the Izmir Bay, and it is easy to reach either side through boats and ferries. Konak is the culture, business and entertainment center of the city, with its Alsancak district and its shore, Kordon. It is possible to find everything from business centers to shopping malls, various restaurants and cafés in Alsancak, which is also a preferred zone for luxury investment. Kordon is popular for walking, resting in its green spaces and having a beautiful dinner in the fish restaurants next to the sea. Agora Open Air Museum, displaying the structures belonging to the Roman period is also close to the center. Konak harbor is a historical harbor used to travel to Karsiyaka. Karsiyaka is on the other side of the bay. It is a residential zone with a long shore. The parks on the shore were renovated and new public facilities were built, keeping its peaceful setting. Its northern part became an important area for property investment in Izmir and several building resorts and luxury houses were built. Mavisehir is the center for luxury properties in Karsiyaka. Cigli, the neighbor of Karsiyaka is also a trending region in Izmir real estate market. Izmir Natural Wildlife Park, which is home to 1500 free roaming animals from 120 species, is also located here. Balcova is next to Konak, and is famous for its thermal and luxury hotels. It is also popular for luxury real estates and residences. Bornova is another central district next to Konak. Homeros Valley in Bornova is another touristic destination with its artificial lakes, walking trails and natural setting. There are a lot of boutique hotels around the valley. Bayrakli has an increasing popularity for real estate investment in Izmir. Guzelbahce is a nice province with a beautiful landscape of the Aegean Sea and citrus gardens. Its long shore with beaches gets more crowded in summer. Buca is one of the oldest districts of the city, and several new construction projects transform its landscape rapidly. Aliaga is the industrial province of the city, with several petroleum companies, an industrial zone and a big port.

Izmir has several beautiful districts, where there are beautiful beaches, forests, olive and citrus gardens and historical settings. The inhabitants of the city spend their weekends and summers in their summerhouses in those places. Those who want to spend peaceful holidays in a beautiful environment prefer Karaburun and Mordogan, while Cesme is a worldwide famous touristic resort, with several beautiful beaches, thermal hotels and a more urbanized setting. Seferihisar is a citta slow and a naturally protected area due to its archeological structures. Sigacik, 5km away from Seferihisar is home to Akkum beach, which is also suitable for windsurfing. Dikili, two hours from Izmir, has the longest beach of Turkey, called Malena Beach. There are plenty of beautiful bays, blue flag beaches and thermal hotels in the district. Urla, which is 40km away from Izmir, is home to Quarantine Island, where the immigrants were kept for health check-ups and Yassiada, a popular destination with its beautiful natural environment, boutique hotels and historical sites. Foca, a famous seaside village, is 70km away from the city center, and its historical sites, fresh fish, beautiful bays and peaceful atmosphere make it one of the most popular places for summer retreats. Siren Rocks in Foca, which also have a mythological importance in history, is a favorite destination of the boat trips and are home to the endangered Mediterranean seals. Yeni Foca (New Foca) is a sub district of Foca, 20km away and it is a more urbanized region. There are a lot of beautiful beaches on the road between Foca and Yeni Foca. 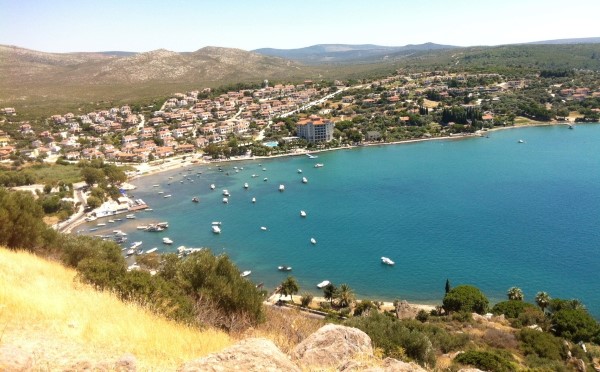 WHAT TO DO IN IZMIR