Marmaris is a touristic port town, located at the intersection point of the Aegean and Mediterranean Regions in southwest Turkey. Its green pine forests stretch towards its long blue flag beaches, making Marmaris a world famous spot, where the turquoise and the green blend perfectly. Although the population is around 30.000, it significantly increases by ten times during the high season. Many international visitors come to its luxury resorts while sailors, trekkers and divers discover its natural and historical attractions.  Marmaris Public Beach and the Uzunyali Beach are the most popular beaches in the center. Paradise Island, the peninsula at the entrance of Marmaris Bay, is a frequent stop for daily boat trips. It is possible to reach the island through a nice walk trail at Liar Strait. The Cleopatra (Sedir) Island, which has unique golden colored fine sands, has a special importance with its place in mythology. According to the legend, those special sands were brought by Julio Cesar as a gift to Cleopatra, who had accepted to marry him. There are also historical Roman And Byzantine sites on the island, which can be visited through daily tours. This naturally beautiful town does not lose anything from its pace during the nights, with its lively bars and restaurants. There are several shopping options from Grand Bazaar to the many shops in the center. Moreover, its aqua parks are perfect for family entertainment. It is located 1 hour away from the Dalaman International Airport. 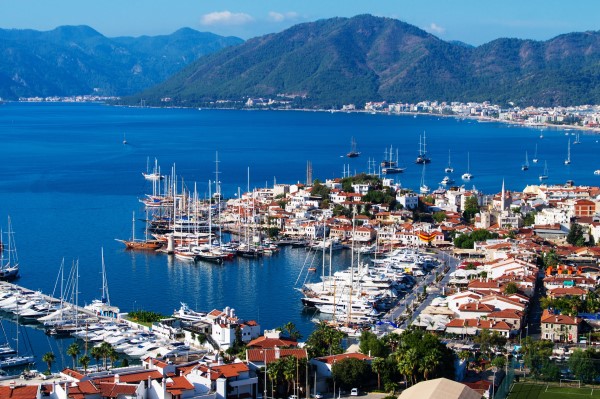 Marmaris was considered as part of Caria, and its name was known as Psykhos in the 6th century B.C. It was conquered by Alexander the Great in 4th century B.C and became a war zone of several ancient states from Ionians to the Byzantines and the Seljuks. In the 16th century, the Ottomans captured it. Marmaris Castle and the Hafsa Sultan Caravansary are the most significant examples of Ottoman architecture in the area. There are also several ancient cities around, including Phsykos in Asartepe, Amos in Turunc, Loryma in Bozburun, Kedrai on Sedir Island, and Bybassos in Orhaniye village. 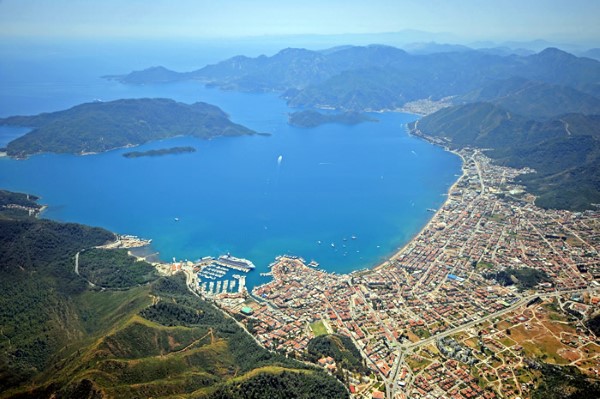 Several multinational tourism companies make business and property investment in Marmaris as it has a big share in the overall economy. Moreover, many locals and foreigners buy Marmaris properties or lands for their summer retreats. The districts of Marmaris are as famous as the city center. İcmeler is the most populous district of Marmaris. It is just 8km from the center and home to several luxury real estates and resorts as well as boutique hotels and hostels. Its beach is one of the most popular beaches. Turunc is a beautiful bay and an old fishing village, which is now mostly visited by boats and yachts. Its main agricultural practice is citrus fruits. Moreover, Amos antique city grabs the attention of more and more people every year. Hisaronu is a big district with a calm atmosphere, and a favorite place for the surfers due to its steady winds. Horse-riding is also very popular here. Orhaniye is famous with its Kizkumu Beach and shallow waters, where you can literally walk on water. Turgut is home to a waterfall that can be reached through a short walk trail. Its regional carpet business and agricultural products are also very famous. Selimiye bay is another hub for peace and nature lovers, and it is possible to see historical Hellenistic sites in the region. Sogut is a trending village of Marmaris, which is 60km away from the center. Its beautiful Saranda Bay and its opportunities for affordable real estate investment in Marmaris draw in many visitors here. 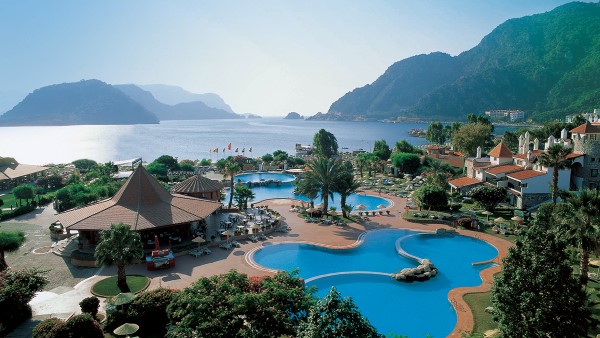 WHAT TO DO IN MARMARIS